Get fresh music recommendations delivered to your inbox every Friday.

from Secrets | Fates: Tales of the Toci by Sonic Parlor 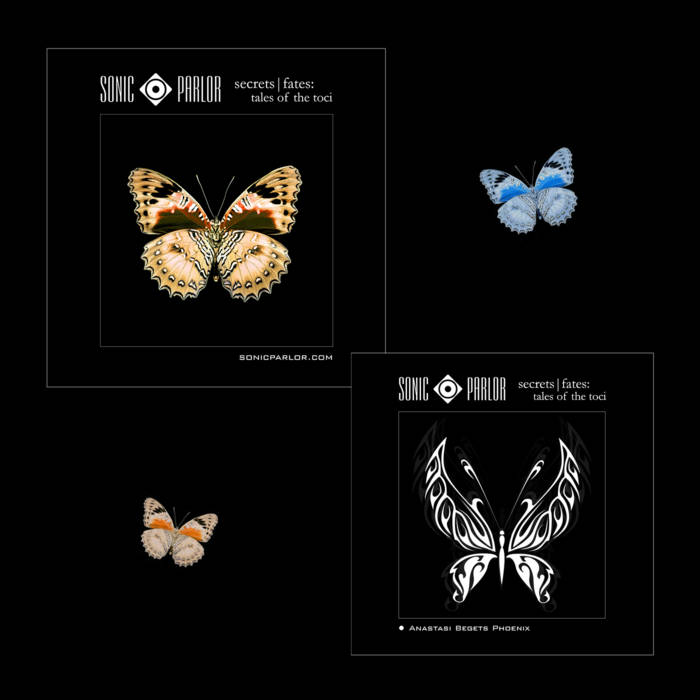 I had her bound to the fire. For the flames to consume. With her flesh to be no more. Just ash to crown my head. To put an end to the plague. Cease the stream of the vile. To cleanse us all of her name. The demands that I said. Curse my eyes for what I saw. Not a thorn to leave my side. But a glimpse deep from my past; reached from the burn. To I, that begets the spawn. The birth from my command. Death did not heed my bid. Yet bore anew, her return. Caught in the glass of the blaze, the blight I see was me. Hope rises from our dreams. As we both will live. As we all will live. As you and I will live. While also... dead.

from Secrets | Fates: Tales of the Toci, released December 13, 2020
Today the Queen ordered death, by fire, for the vigilante that has been thwarting the new expansion campaigns. However, it has been reported, that during the ceremony of the blaze, a new shocking precedent has been set, in that the accused, has survived. In a recent announcement released by the queen, it is stated that in her horror, she has come to learn, that the burden on society, the condemned, is actually Anastasi, of the 4th world. the very one, that carries the fabled title, of, the holder, of dreams. As the tale implies, she has been the champion, of the reaching hands, as well as the falling, since the end of the fourth over a thousand years ago. all the while, defying aging, and even death. The division of science, is already working on confirmation of these claims, of both surviving the ceremony of the blaze, and the often debunked implications of those with the power, of suspension of life. Reports are coming from all sectors, of how Anastasi, is being hailed, as a hero of the people, and how she is now being referred to, as, phoenix.

Sonic•Parlor is a self expressed conceptual entity who is focused on the creation of albums of speculative
fictional concept music ranging from:Alternative, Experimental,
Electronic, Musique Concrète, Art Punk, and Neo Folk. Sonic•Parlor welcomes you to the elaborate stories of the Vespinae, the Toci, The Clerics, The Warden & The Watchers, and the daring residents of Ballaärat. ... more

Bandcamp Daily  your guide to the world of Bandcamp

Kari Faux drops off her deluxe album 'Lowkey Superstar' plus tunes by Shunaji and Samplelov.